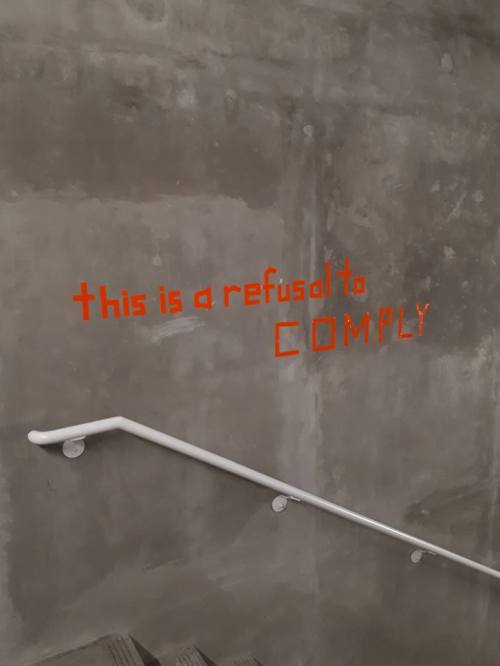 This installation makes use of found poetry through my aunt Francine Burning’s Master’s thesis Reclaiming territories through indigenous performance.

this is a refusal to comply

are a call to think through reclamation as an act of sharing and living with reciprocal values. Of valuing the land as we would each other. And thinking of these acts as refusals of the systems of which we are subject to.

This piece was originally done in the stairwells at Emily Carr University of Art + Design’s new campus on Great Northern way and the install was done with the help and support of Chase Keetley. 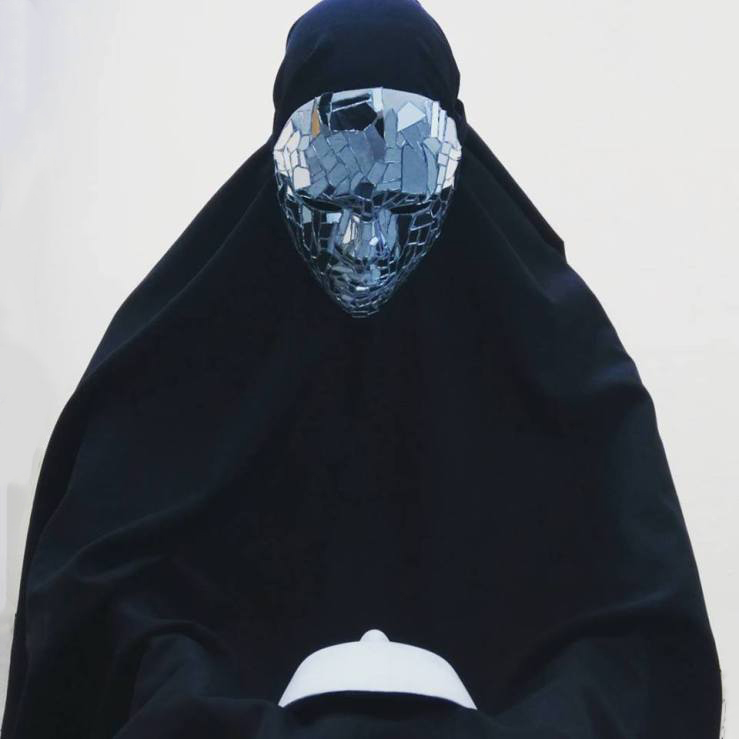 Reflection Piece sets up a moment between a cloaked figure and a white mask and contemplates the tenets of that moment. The figure is wearing a mask made from shards of a broken mirror and the frame is made from cardboard. Each time this piece is shown, the frame is built anew. The figure is fluid; it exists without a fixed state. Thematically it deals with the undertaking of settler colonial attitudes. The fixed gaze of the figure on the white mask deals with the complexities of identity of living within a western framework.

Reflection Piece was originally a new component of a larger installation of the artists 2012 work Story Time which was adapted in September of 2016 for The Mush Hole Project. The Mush Hole Project was a site-specific performance and installation exhibition at the former residential school The Mohawk Institute, located in Brantford, Ontario, as a “response to the TRC’s Calls to Action, as well as to foster collaborations between Indigenous and non-Indigenous communities, and engage with the Woodland Cultural Centre’s campaign to Save the Evidence.” The piece was made after a request from one of the curators to bring the ‘character’ of the nun out of the story from the original installation. 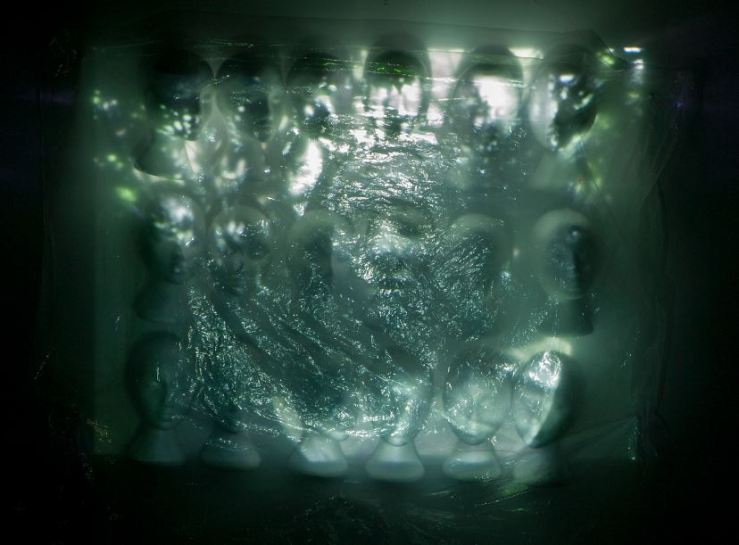 Story Time began as an exploration into the artists’ relationship with intergenerational trauma. Burning is a descendant of survivors of the Mohawk Institute which was the oldest and longest running of the Indian Residential School system.

The installation projects a video of an approaching nun onto a clear plastic sheet covering styrofoam mannequin heads. The audio recording is from CBC where residential school survivor Irene Favel speaks of her experience in a Saskatchewan school. The imagery of the nun is used to invoke the experience of having been told stories from Residential school survivors and the feeling that accompanied them.

Story Time was shown in the group exhibition NET-ETH: Going Out of the Darkness in 2013 for which it received acclaim in Canadian Art Magazine. The installation was further adapted in 2016 for The Mush Hole Project at the former Mohawk Institute, which was a response to the Truth and Reconciliation Commission and meant to engage with the Woodland Cultural Centre’s Save the Evidence campaign.

Who Will Be My Witness?, 2016, Performance Installation

Who Will Be My Witness was a performance installation done at the former Mohawk Institute Residential school during The Mush Hole Project in 2016. Burning performed with their grandmother, Alberta Monture, who smudged them with an eagle fan as they struggled to stand. After coming to stand, Burning addressed the crowd and wrote “Konnoronhkwa, may your spirit rest” on the wall with charcoal and handed it off to a member of the crowd. Charcoal was left in front of the piece for viewers to write on the walls of the building for the rest of the 3 day event.